Explaining his reasoning behind re-amping on the album “With Teeth”

“I wanted it to make it sound performance-based. I was using live drums, most of the tracks have live drums on them. A lot of the sounds were miked. Even if it was a synth line, it might go through a speaker cabinet to give it the impression of it being played.”

Excellent cataloguing of Reznor’s ‘moves’ – thoughts and actions in the studio, for the making of “with teeth” in this Audiohead article:

Nine Inch Nails – The End of Nothing (part 1)

Nine Inch Nails – The End of Nothing (part 2)

Nine Inch Nails – The End of Nothing (part 3)

Trent Reznor: “….I do think you can take the aesthetic of humanity and imperfection and spontenaity, and use it with computers. And that’s — in kind of a rough, raw way — one of the things we’ve stumbled into with this record.”

Nine Inch Nails – The End of Nothing (part 4)

“It’s never been a ‘Let’s everyone sit around and jam’ type of arrangement,” stresses Reznor.

“I’ve said this before, but I don’t want to go out with the same set up as we had last time,” says Reznor. “I think it worked and we did it well. But if I did it again, I would be living in the past. It’s tough sometimes to say goodbye to something, but I think that has run it’s course. And I’m not saying I’ll never play old music. But I think the format has been documented, we played a million concerts and it’s time to risk failure at something else.”

“If there’s one kind of music I hate, it’s corporate-safe sound-alike bullshit. It infuriates me to hear it.

“I’m sure I fucked my career up by not putting out enough stuff, but that’s not why I’m doing it,” says Reznor. “We’ve never been the type of band where somebody sits down and says, ‘Book your tour because you’ve got this much time to get your record done, and then we’re going to shoot your video.’ The most important thing to me is making great music and the rest of the world has to fit to that schedule. That is — to me — the most important thing. And in my own brain, I’ve had to work some issues out to be able to make music. But I’m fortunate that I’m in the space that I’m in right now, where it feels good.”

Nine Inch Nails – The End of Nothing (part 5) 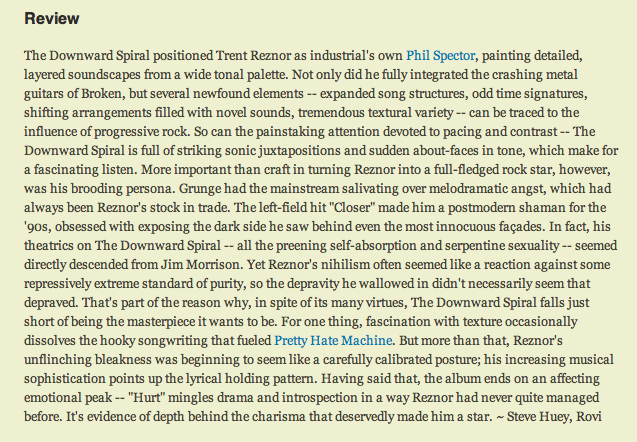 sharing thoughts of his vulnerability in the context of writing material and with reference to Johnny Cash covering “hurt” (from 5:30)

Talking of the making of “the fragile” in his studio (nothing studios) in New Orleans (from 1:40) – “….it’s an interesting journey, to stop other parts of my life, to see what happens if you go as far as you can go down a certain path and that path might lead to somewhere else….”  He later talks (4:40) on the blurred lines between financial and critical success (re. “the fragile”).

“What I wanted to do with this album was to make it imperfect. I wanted it to sound harsh and unsure of itself” (WITH TEETH)

…in response to the soullessness of computer music

play the automation (use desk?)

interview re. the EAR synth

YEAR ZERO – “the beginning of the end” (Buchla solo near end)

Nine Inch Nails – The Beginning of the End

Interview about some studio approaches:

“I’d rather die than give you control.”

’I did ‘Natural Born Killers,’

and ‘Lost Highway’ for David Lynch,”

“Quake was fun because they didn’t want hard-rock goofy music going through the game,” explains Reznor, “it was all about atmosphere at the time.”

Whereas Reznor has almost always recorded guitars direct in the past, he did go for some miked cabinet sounds this time, at Moulder’s encouragement. On the direct front, Reznor generally used Amp Farm (an amp-modeling plug-in card for Pro Tools) or a Zoom speaker simulator. A DigiTech 2120 was also in favour for a while. Typically Reznor would record multiple takes of any given guitar track into Pro Tools, often working in loop recording mode. He generally sat at the control room console playing guitar while Alan Moulder manipulated effects controls in real time and programmer Keith Hillibrandt wrote down the bar numbers where things started sounding cool. The multiple guitar takes were then layered up using Pro-Tools’ cut-and-paste facilities. That, for example, is how the distressed power chording on “The Day the World Went Away” was achieved.

Listen to our clients on …